skip to main | skip to sidebar

How To Continue Supporting The Richmond Lesbian Survivor

Hey people, its been a minute. Going thru many many changes (like so many others right now) and I have not been able to blog as often as i'd like. I'm thankful that the winds of change have been mostly gentle around really significant events, and am holding the intention that it remain so (and also for all y'all going thru it too!)

When we hear about stories like the ordeal that the Richmond Lesbian (aka JD) went through, it also gives us perspective around our own viccisitudes, struggles, and quest for healing. JD was sexually assaulted and beaten by 4 young men on her way home from work on December 13, 2008. An outpouring of support resulted, which i blogged about. And the truth is, JD is still in need of multiple forms of support. This should not be a surprise. Her friend has a blog that is a call for continued support, and i hope that people will be moved to help out someone else in need.

Some powerful words from the blog entiled "We're Here For You" (**trigger warning, paints picture of JD's violent ordeal)

Close your eyes, imagine being on a street, in what many people would consider a dangerous neighborhood, at ten o'clock at night, imagine that you are there in the middle of December, and that you are naked. Imagine how vulnerable and frightening it would be. Now imagine that blood oozes from wounds on your head, that you are cut and bruised from head to toe, and you are shaking uncontrollably from much more than the winter cold. Imagine a fear so violent and so overwhelming that it is literally shaking your entire body in it's fury. For JD, imagination isn't required to conjure up this image, she has her memories, because she lived it. I try not to think about the half hour which came before this, when coming home from one of her two jobs, JD came upon four men breaking into a car on her street. Before she even knew what was happening they attacked her, striking her with such force on the back of her head that her skull was split. They thought she was a man, and they intended to rob her, but when they realized that she was a woman, a lesbian, the assault took an entirely different turn. They began beating and sexually assaulting her in the back of her own car, taunting her when she pleaded for them to stop. When one of the men saw some people walking up the street, they quickly shoved her into the car, and drove to an abandoned apartment building, where they continued to rape, and beat her. The entire time the assault took place they hurled insults about her femaleness, and about her sexuality, they were clearly offended by her being a lesbian, and it was their intention to make her pay for that offense.

No one deserves having their humanity assaulted in this way. I imagine that the path of survivorship and healing for this woman is just beginning. It is good to see that she obviously has a dedicated support system around her. I encourage people to visit the blog to see how they can help, there is a drive to just help her make this month's rent at this point.

Wishing her and all survivors of sexual violence healing and light, and also wishing healing, light and an evolving sense of empathy to the fractured people who perpetrate these acts. May the winds of change also blow gently on JD as she moves through this.
Posted by richard at 1:30 PM 2 comments: Links to this post 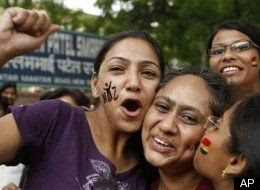 YES! An archaic and oppressive law leftover from British colonial rule finally falls in India. I can only hope and pray that this indicates a domino effect for other former British colonies! If you grew up with Ovaltine, Enid Blyton, tea, marmalade, and your parents remember when money was shillings, you mus know is you mi chattin to! Heh. This is great news people, this will be a huge step for human rights. In places where old colonial "buggery" laws still exist (like Jamaica), violence towards LGBTQ folks are not only "justified" by interpretations of religious text (religious text that usually also recommends stoning adulterers to death. Not seeing that so much.), but also are given more cultural legitimacy when the law says same-sex sexual activity is illegal. At some point, it becomes forgotten that these were not our laws, and it becomes ingested along with other toxic, community fracturing and disenfranchizing elements of colonialism. I blogged more about Jamaica and historical factors that contribute to our brand of homophobia here.

This is amazing news, it gives me hope for more change on a global level! The Huffington Post reports:

In what many are calling "India's Stonewall", the New Delhi High Court on Thursday decriminalized homosexual intercourse between consenting adults, by striking down section 377 of the Indian Penal Code. This law labels gay sex to be an "unnatural offense", punishable with up to ten years in prison.

Drafted in 1860, this Colonial-era law was brought into effect by the British, and was in line with similar anti-homosexuality legislation passed in England at the time. In the past decade, gay rights activists and lawyers have strived hard to abrogate Section 377, calling it "inhuman", and as the Naz Foundation, which filed the petition to abolition 377 in 2001 argued, a violation of constitutional rights to privacy and equality.

Amazing. May the decolonization process continue for all former colonies, more power, more power! And may other straight allies also step up to these useless and hateful laws, so our LGBTQ brothers and sisters don'thave to do this alone!

Heh... I suspect that some of my more recently reconnected Jamaican friends via facebook must be like "Woy... Richard really serious bout dis ting!"

Sweet. I leave you with a suggestion. I highly recommend watching Deepa Mehta's "Fire" with friends to celebrate this victory, and stimulate discussion. Peep the trailer! Bless up

A woman who is not feminist = A woman with high internalized sexism.

why would you want to meet men who are actively anti-sexist?

What last inspired you to explore new sexual territory?

what should be done about homophobia and colonial buggery laws in Jamaica?

How has reading this blog been for you? (you can pick more than one)

which western feminist icon are you? (apparently i'm angela davis)

Women's Parties/Events in the Bay Area